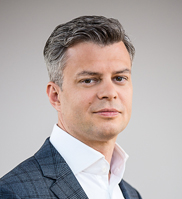 Thomas Arnoldner was born in 1977. He studied business management at the Vienna University of Economics and Business and the Stockholm School of Economics.

The professional career of Thomas Arnoldner started in 2003 at Alcatel Austria. After several management positions in the company he took over as CEO of Alcatel-Lucent Austria in 2013. From 2015-2016, after Nokia acquired Alcatel-Lucent, he was a member of the integration team and developed the post-integration strategy for the combined company. From 2016-2017, he led Nokia's European growth strategy in the areas "Smart City", "National Broadband Programs" and "Public Safety" as well as strategic plans for main Nokia countries. From 2017-2018 he was a member of the executive board of T-Systems Austria GesmbH. 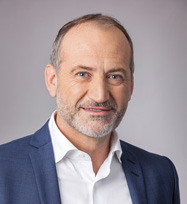 Alejandro Plater was born in 1967 in Argentina. He studied economics at the University of Buenos Aires and completed several business postgraduate studies in sales and executive development at Columbia University and Wharton School in the USA as well as at London Business School in UK.

He began his professional career in 1991 as Risk Analyst at "Sud America Seguros" before joining Ericsson in 1997 as Sales Director for Argentina. Briefly afterwards he became Head of Business Development for several countries in South America. In 2004 he moved to the global headquarter in Stockholm, Sweden as Sales Director for the Americas. Two years later he was appointed as Sales Director for Mexico and the following year as Vice-President and Key Account Manager for major customers. 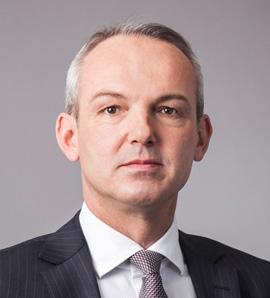 He began his professional career in 1994 at Voest Alpine Eisenbahnsysteme in the area of international acquisitions. From 1998 to 2000 he assisted Constantia Corporate Finance Mergers & Acquisitions in various areas as a consultant. 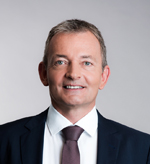 Marcus Grausam, born in Upper Austria in 1968, studied mechanical engineering at the Technical University of Vienna. After a few years as research assistant at the TU Vienna, Marcus Grausam started his career at mobilkom austria in 1998 as a sub-project leader for the introduction of a billing system. In 2006 he took over the area "Operation & Maintenance".

In 2010, Marcus Grausam joined A1 Telekom Austria as Head of Operations. In this position he was responsible for the quality and stability of networks and services, management of the billing system, applications and data center topics, as well as housing, hosting, operating customer networks and information security.

Since October 2012, Marcus Grausam took over the position of the CTO at A1, where he made important progresses for the technological future of Austria, including the extension of the fiber network, as well as introducing new technologies such as 4G, 5G or vectoring. As of September 3, 2018, Marcus Grausam took over the function of CEO of A1 Austria.

Jiří Dvorjančanský was born in 1969 in Karviná, Czech Republic, and graduated from the Czech Technical University in Prague and the Grenoble Institute of Technology. He then earned his MBA through the University Thunderbird EMBA program in Prague.

He joined Vipnet (now A1 Croatia) in August 2014 as President of the Management Board, and as a Board Member for Marketing, Sales and Customer Service. As of 1st June 2015 he is Chief Executive Officer of the newly formed Cluster Croatia and North Macedonia within A1 Telekom Austria Group. 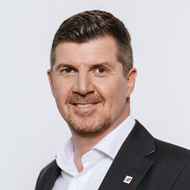 Helmut Duhs was born in Klagenfurt, Austria in 1971 and has one daughter.

In 1990 Helmut Duhs got a degree of Engineer of Communications Technology and in 1993 graduated from University of Vienna as Master in Business Informatics. In 2002 he completed post-graduate study at Danube University with Diploma of Executive MBA.

Helmut Duhs works since 1996 for A1 Telekom Austria Group in different managerial roles, starting within the financial sector. In 2004 he was appointed to the position of Chief Executive Officer of mobilkom austria group services GmbH and since then he is also a member of Group Leadership Team. Since 2007 Helmut Duhs runs the Belarusian Segment of A1 Telekom Austria Group successfully, being recognized on local and international level.

Dejan Turk was born in Maribor, Slovenia, in 1967. He studied marketing and finances at the Vienna University of Economics and Business Administration.

He began his career as a restaurant manager at McDonald's Slovenija, where he later became CEO of the chain of restaurants in Slovenia and Croatia.

Dejan Turk joined A1 Telekom Austria Group in August 2004, when he became the head of marketing and sales at Si.mobil. In August 2006 he was appointed Member of the Board responsible for market operations and from March 2007 to February 2014 he was the Chairman of the Management Board of Si.mobil.

He took over position of CEO/CMO A1 Serbia in March 2014. As of May 1st 2015 was appointed CEO/CMO of the new organizational unit "Serbia& Slovenia" within Telekom Austria Group.

Alexander is Chief Executive Officer of A1 Bulgaria since October 1st, 2015. He has over 15 years of professional experience in telecommunications. Alexander joined Mtel's team from Vivacom, the Bulgarian incumbent telecom, where he was Chief Commercial Officer since 2008. Previously, from 2001 till 2006, he was Chief Commercial Officer of Germanos Telecom Bulgaria, mobile products and services dealers' chain, and from 2006 till 2008 – a Chief Executive Officer of the company.

Elisabetta Castiglioni was born 1964 in Premosello Chiovenda, Italy and holds a PhD in Business Administration from Munich Technical University and an MBA from Ludwig-Maximilians-Universität in Munich.

She has a proven track record of delivering growth in complex and innovative businesses. In her role as CEO of Siemens Global Media Business, a unit of the Group´s IT Solutions and Services, she developed a diversified global business, serving top tier media and entertainment clients worldwide. Prior to that, Elisabetta was Executive Vice President Europe for the Siemens Cordless Business Unit. At MCI – now Verizon Business - she was EMEA Director of Product Marketing launching cutting-edge Data Communications solutions for the corporate market. She also oversaw the rollout of MCI's network expansion in Europe and Asia-Pacific.

Eva Zehetner studied International Business Administration at the University of Vienna. Parallel to her studies she began her career at HP, where she initially worked on various HR projects. After completing her studies, she worked in finance department for more than three years before returning to HR and working as an HR Business Partner. She also worked for HP Technology Services, later in an international role.