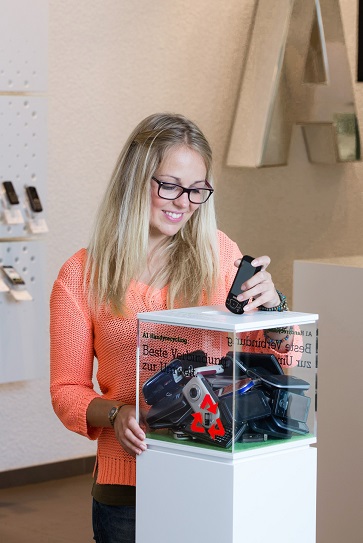 Reduce – Reuse – Recycle is A1 Telekom Austria Group’s motto when it comes to the preservation of resources. Their economical use is not only beneficial to the environment, it also reduces costs. For Telekom Austria Group, resource preservation not only means assuring proper disposal or recycling but also preventing waste wherever possible. After all, “less is more”. Consistent life-cycle management guarantees that technical equipment is used for a maximum amount of its permissible life cycle, re-used in the best possible way or properly recycled.

Mobile Phone Recycling
Although it does not manufacture mobile devices itself, the A1 Telekom Austria Group contributes to preserve resources in this respect as well with its mobile phone recycling initiatives. Most of its subsidiaries — some since 2004 — allow customers to give back their old mobile phones free of charge. These old devices are passed on to specialist recycling companies, which recycle and reuse 70 % to 80 % of the substances contained in them.

In Austria, for example, 100 % of the proceeds from mobile phone recycling are used to fund climate protection projects.

Taking action to preserve resources is also important in an office setting. Which is why the A1 Telekom Austria Group has set itself the target of reducing paper consumption by 10 % between 2016 and 2018. Digitalization of internal work processes is highly important in this respect. An increasing number of mobile devices are being used for field services, for example, because they allow data attachments such as plans and assembly orders to be processed digitally. In Austria alone, this practice saves around 100,000 sheets of paper per year.

From 2018 onwards, all driver logbooks will be managed in a purely digitally manner as well. Aside from digitalizing internal work processes, switching to double-sided printing as standard and procuring Follow Me printers, internal campaigns also reinforce environmental awareness, motivate employees and involve people actively in environmental measures.